By
mattleighton
– Posted on December 1, 2015Posted in: Misc.

Recently, I was talking with a friend about what there is to do in Arlington while he is back in town on break from graduate school. You see, this friend has been having some issues with his liver and was not interested in consuming alcohol in the (near) future.

While he was OK with that reality as he was never much of a heavy drinker, he was curious as what there is to do in Arlington while he is home. He asked me, “Other than things having to do with drinking, what should I do for the next 28 days while I am in town?”

I could only stutter out a weak answer at best: “Have you gone and explored Zachary Taylor Park before?” I most likely thought of this response to narcissistically prove to myself that I knew of a park in Arlington he had never heard of and to avoid the impending awkward silence that was about to happen because I could only think of alcohol-related activities in Arlington in that exact moment.

That got me thinking, What can you do in Arlington in December that does not involve alcohol? The kicker here is ‘December’. Anyone can find something to do when it is the middle of spring and everybody is outside. But how about in winter?

Without further ado, here are 10 December activities in Arlington that you can do that do not involve alcohol: 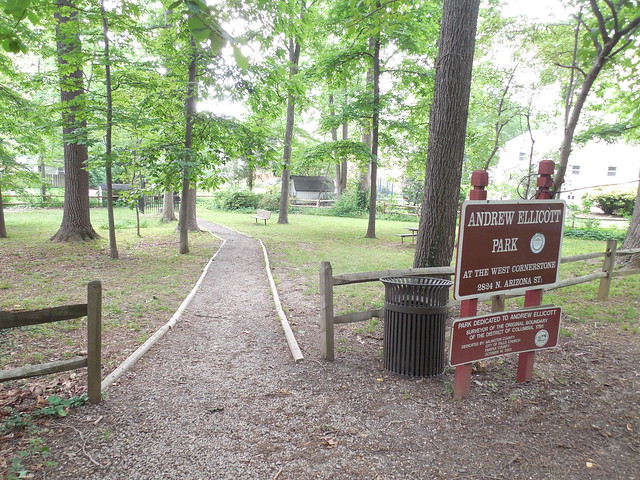 Between 1791 and 1792, Major Andrew Ellicott placed 40 markers around the land that would eventually comprise the 100 square miles of federal territory that became the District of Columbia in 1801. The boundary markers can be found in Maryland, D.C., and in Virginia. The Western-most stone is located on the edge of Arlington at 2824 N Arizona Street. The park is aptly-named Andrew Ellicott Park. If you are feeling ambitious, try to find the other nine stones that are located in Arlington.

Yes, biking in December is my suggestion. On a sunny, 45-degree day, your body heat will keep you warm and you will forget about the temperature 10 minutes into your ride. And no, you do not have to bike all 17 miles. Whether you own a bike or have a CaBi membership, it is easy to split this ride up into smaller chunks. Crystal City to Rosslyn? No problem. Westover to Shirlington? Piece of cake.

Pro tip #1: Slow down as you pass through Gravelly Point. Kids will blindly dart on and off the trail without a care in the world (or parental supervision, a general awareness of the surroundings, etc).

Pro Tip #2: Speed up as you pass by the public art installation along the sewage plant facility while on the Four Mile Run Trail portion of the loop. It might hurt to hit that higher gear, but it won’t hurt as bad as if you were to look over and see what your tax dollar is going toward.

It’s December: you are not exercising outside as much as you did in the summer, your gym membership is becoming an afterthought, and you are still recovering from Thanksgiving dinner. Get out and try some hot yoga to loosen up those limbs. Yoga is deceptively difficult and once you crank up the heat, it becomes even tricker. The thing about yoga is afterwords it feels like you stretched muscles you did not even know you had.

Some of my friends I have tried to convince to join me in class shy away at the idea because they think it’s just what chicks do and are worried about their image. The reality of this mindset is that you are just projecting your own insecurities on to how you think people perceive you. That is a lot of wasted energy when in fact, nobody gives a shit. Check Groupon for some deals on hot yoga in Arlington.

I use hike liberally here. It is more of a nature walk. The Potomac Heritage Trail runs along the Potomac River in Arlington starting around Teddy Roosevelt Island and heading all the way up well past the Arlington boarder. It makes for a great morning or afternoon outing be it a solo trip, with a significant other, or with a group. The landscape, views, and foliage offer a unique glimpse at the more forested areas of Arlington County. There are a ton of places to get on the trail, but maybe the best places to hop on are at the Gulf Branch Trail, Donaldson Run, Windy Run, or at Teddy Roosevelt Island.

Photo via Jackie L on Yelp

Brunch in Arlington does not have to consist of flashing lights, sparkling bottles, and ear-deafening EDM. Throw it back to a simpler time when the brunch options in Arlington consisted of Bob & Edith’s and Silver Diner (before the Diner went all “Farm to Table”…think Diner circa 1998.). But Bob & Edith’s is the classic brunch spot. You know when a restaurant does not even bother to have a website, it has to be good.

Another outdoor activity in December? You betcha! Frolf (frisbee golf Jerry! It’s golf…with a frisbee!) is surprisingly fun and really competitive when you get a group of people together to play the nine-hole course at Bluemont. Just pick up a few discs on the cheap and Dick’s and you’re in business. Read more about the course here.

For $9, you get to skate on the rink for two hours. Now I am just going to put that out there as very good value for your money. Think if you took a special someone out for a date. What would one drink cost you? Plus, you get to stay active, experience a neighborhood that maybe you do not frequent as often, and my personal favorite: people watch. It is an all around brilliant use of time and money, and makes for a great ambiance at night in late December.

Open Saturdays and Sundays from 1pm – 4pm, the Arlington Historical Society provides a glimpse of Arlington’s past through its vigorous collection, preservation, and exhibition of Arlington history and artifacts. It can be too easy to live in a city (or county) and simply not care about the history, or why things are the way they are. Whether you are a lifelong Arlingtonian, or simply here until your lease expires in the summer, Arlington is filled with history that will absolutely be worth your time to visit the Museum.

The Central Library is always putting on workshops, talks, and interactive exhibitions that attract many people daily, weekly, and monthly to its confines. And no, I am not suggesting late night nerf tag or whatever. The library is seriously underrated. Check out their events. Now. Never forget: Having fun isn’t hard when you’ve got a library card. (You don’t actually need a library card to attend events).

There are not many reasons that I recommend going to Ballston Common Mall. Last weekend when I went to see the new Hunger Games movie was a slight exception. (Although I wish I would have watched at least one movie in the series beforehand. The storyline was tough to keep up with without any prior knowledge and it was also incredibly cheesy at parts, but overall the movie was decent).

The major exception to visiting Ballston Mall is watching the Caps practice at Kettler Capitals Iceplex. The Caps are currently third in the Eastern Conference and are off to one of the best starts in franchise history. The squad is incredibly talented this year and I would not be surprised if they were playing in late spring. (I have also said this for the past 7.5 years, so take it with a grain of salt). Most practices are open to the public and are announced on the Caps’ website.

Honorable mention: See a play at the Signature Theatre, hang out at a dog park and dog-watch (it’s not that weird, trust me), play pickup basketball at TJ, visit Fort CF Smith Park.

In addition, you can also check out Arlington County’s new calendar called ‘Arlington Today‘ that has a range of activities from all across the county during the time frame you select.

There you have it, 10 things to do in Arlington that do not involve alcohol.

How does this list compare to yours? Let me know if I missed anything in the comments section below.